Why would I recommend a cemetery to visitors of New York City? Especially when I am a baby?

I love the parks, I like walks, I like animals, that’s why Greenwood Cemetery is actually one of the top picks of my mummy for New York City!! 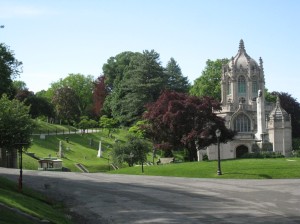 It is one of the things that Jack Spade designer, Andy Spade, like! Yeah, just one of my few connections in New York…  He says it’s the ‘quietest spot in New York’. But ironically, the map of Greenwood Cemetery says that it ‘attract 500,000 visitors a year, rivaling Niagara Falls as the country’s greatest tourist attraction! But frankly, we saw less than 10 people, so if you want a peaceful walk, yes, you are safe. (Just don’t go on event days.)

One other reason is that we stay just a 5min walk away at Best Western Prospect Park. Daddy spotted the beautiful gate and thought it was a church. He looked it up and viola,  here we are!

Come in the morning for the fresh air and the cool weather!

One of the attractions is actually the tombs itself! Not only the tombs are very beautifully and elaborately made, it is also a historical burial grounds of many famous people. You know Bruce Lee? He is not here… he is buried in Seattle. You know Houdini? He is not here either. Who are here? Well, not many that I know of, being a Singaporean, not well verse in American history. Who can blame me? I am just a baby.

One of the tombs

Ok, you know morse code? This chap call Samuel Morse invented it and he is buried here. Mummy also recognised one of her music famous persons.

One of the more elaborate tombs

Battle Hill: Highest point in Brooklyn. This is where the civil war was fought.

It’s also the highest place in Brooklyn. You get a glimpse of the Manhattan city from here.

You can see Manhattan from here… 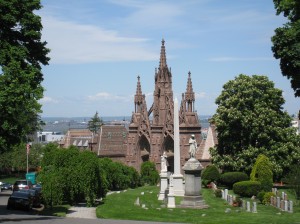 What a grand gate!

After the morning walk, drop by Baked in Brooklyn for your breakfast! 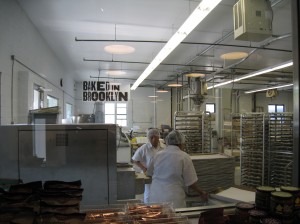 The must try is there Italian cheesecake. Don’t take my word for it, ask them for a small piece to taste first! 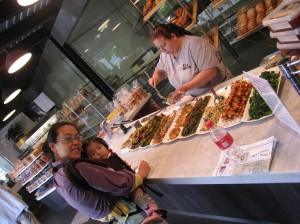