After your morning walk at Highline Park, I suggest you walk or take a subway to Grand Central Terminal. 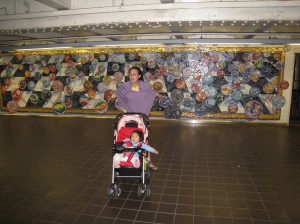 As you know New York is full of old buildings, so a walk can be pretty cool, but provided you have a stroller with a baby in toll, because NY is pretty big. 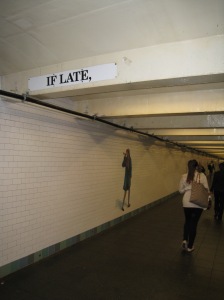 Even the subway has lots of cool subway art. If you are lucky, you can catch buskers at the stations as well as on the train!

Of course, the main feature on this post is the Grand Central Terminal. Featured on many movies, this hundred year old station was saved from the wrecking ball and restored to its grand splendour that you get to enjoy now. 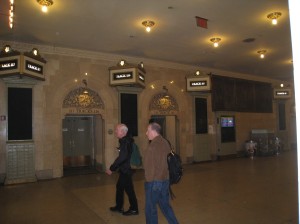 Which track to go….

If you coming from Highline Park, you can take your lunch there at the food court or the Oyster Bar, famous for its clam chowder. The food is generally more expensive than other places.

There’s a free lunchtime tour happening at about 12:30pm every Wednesday. Just wait hear the clock, in the centre of the station, for a group forming for the tour. 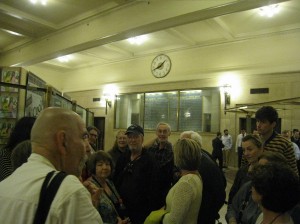 I heard there’s a Friday tour too (Do comment if you have been to that one.). Even if you can’t catch the tour, I think the Grand Central Terminal website is pretty comprehensive if you want to do your own self-tour.

Firstly, the ceiling is amazing. The painting of the constellation is done in reverse because it’s done in God’s viewpoint. It was restored several years ago and it’s so covered up that it was totally black then because of smoke from cigarette! The restorers actually left a patch of black so you can compare the difference.(Try to spot it in the picture)

The terminal is very ahead of its time, with the innovative layout and design, moving passengers very efficient more than 100 years ago! 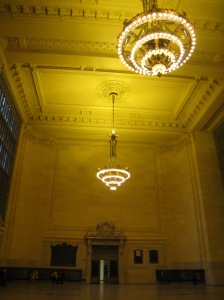 Take your time to admire the architectural structures in around the station. There are many old buildings that are linked to the stations which you must go if you have the time. (Some may not even be on tourist maps.)

If you want to know about some secrets of Grand Central Terminal that even New Yorkers don’t know, or what the tours guide not going to tell you, look at this:

Another must see free sight will be the Chrysler building just next door.

A must see is the interior roof design of the lobby area. 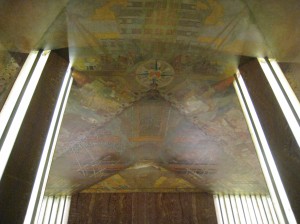 Hope you enjoy your tour of the Grand Central Terminal, and not Grand Central Station… go for the tour to find out why and what’s the difference!