It looks darker; but with a few minutes of exposure, Pyongyang can have a beautiful night scenery. Photo Credit: Fan Zhou

Some of the streets doesn’t have lamp light so it can be rather dark at certain places. Pyongyang is probably not famous for it’s night scenery. There are prominent structures lit at night still. Shops at night are dimly lit. 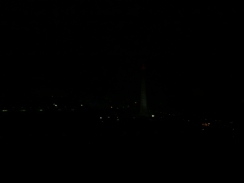 What you will see…

In my hotel, there is a bar and karaoke which tourists will usually hang out.

One objective of my trip was to make as many friends as possible. For the international delegates, a lot doesn’t speak English so it was quite a hurdle. I try to chat with them but it was near impossible sometimes!

At the hotel on the first day, I decided to hang out at the bar with the Portugal delegates. While chatting, some friends joined in. Talk went into magic. Word spread and I started entertaining a crowd, including waitresses, tourists, reporters, guides and manager at the bar. 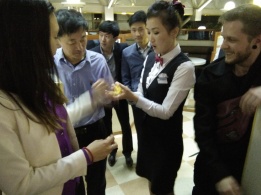 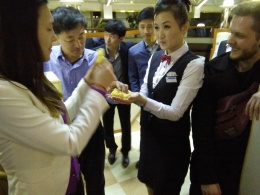 Later, waitresses from a different shift even knew whom I was because they heard about me from their colleagues and wanted to see some magic too. I was getting recognised in the lift. This reporter from Associate Press in Hong Kong asked if I am the Singaporean magician because he heard the commotion when he was having his meal.

I met this guy call Michael Spavor from Paeku Culture Exchange who does a lot of cultural exchange in DPRK. Hope there is chance for me to do an international magic festival in DPRK.

I met people from canada, England, france. It was probably the most fun time in DPRK so far! Interacting with people!

Oh, I am teetotaller so I hardly even drink beer!