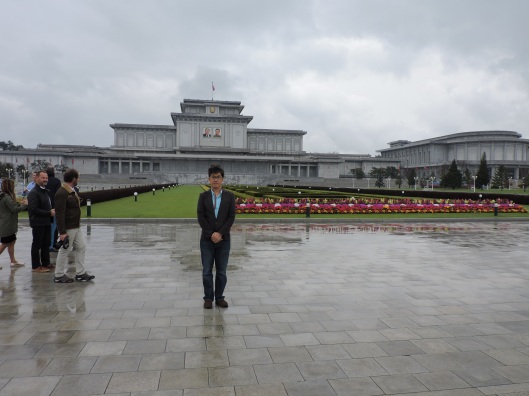 Kumsusan Palace of the Sun or Sun Palace is the itinerary for today.  It serves as the mausoleum for Kim Il-sung, the founder of DPRK, and for his son Kim Jong-il, both posthumously designated as eternal leaders of North Korea.

The palace was built in 1976 as the Kumsusan Assembly Hall and served as Kim Il-sung’s official residence. Following the elder Kim’s death in 1994, Kim Jong-il had the building renovated and transformed into his father’s mausoleum.

We were told to dress as formal as possible for this. Bring as little as possible. Our buses were escorted by a police car to the Sun’s Palace.

After score of travellators and escalators, we finally reach a grand hall in which larger-than-life statues of the leaders were. They really really look real. These are the BEST wax statues I have ever seen. Every details like moles, spots is not spared. Look really as though they are there.

Then we were led to a short corridor with blowers; probably to clean any impurities. It became clear when we enter, the ‘Great Leader Kim Il Sung’s embalmed body lies inside a clear glass sarcophagus. His head rests on a Korean-style pillow and he is covered by the flag of the Workers’ Party of Korea. We have to bow to him 3 times on 3 sides. Because our delegates are all foreigners, I didn’t see how locals would react.

Then we were to led to a museum of sorts to show all the awards and accolades which he had received. We then went to another hall which showed his distinctive green train and black Mercedes used in his travels. There were information on where he travelled to, number of times the train was used, the kilometres travelled.

Then we were led to the  mausoleum of the ‘Great Comrade Kim Jong Il’. Just like the previous times, we had to bow, then museum and finally the hall of the train. This time, it also showcased a green golf cart as well as a small yacht used. He actually passed away on the train suddenly so the train showed the last scene of what it was like in the train, with documents, as well as a iMac.

On the way out, you can collect your camera to take photos of the palace from the outside. (A western lady on the way in, waved and smiled at me; probably I talked to her at the hotel?)

At night, we were treated to a gala dinner at night after our performance (starts 4pm today) The event is held at the People’s Culture Centre. We were served a 8-10 course meal.

I met Chinese as well as Japanese whose ancestors were from Korea. They are invited back to Pyongyang for sightseeing. Apparently there are like 200000 Korean descendants in China alone!! In fact, Kim Sung Il studied in China before.