I think my guide was really keen to watch it after I talked about it. We passed by the theatre when we went to the Munsu Water Park this morning.

When there’s news about getting tickets, he went for it. He told the whole bus about it and tried to organise the bus to go there. Unfortunately, the number of tickets which ASFAF can get is 15 (instead of 90.) and I was one of the lucky few  to get one. He wanted me to leave my phone on the bus, BUT I insisted that I bring because everyone else brought theirs.

When I reached, we took out seats and the few friends like Michael, Steve and others are there (in formal attire).

I noticed that there are big seats in the middle of the theatre. We waited and when the doors opened, the crowd rose and started chanting. Yes, it’s the leader of DPRK, Kim Jong Un and wife.

Wait a minute! We didn’t even go through any security check. Neither are phones checked. Quite a number of us had phones with them. 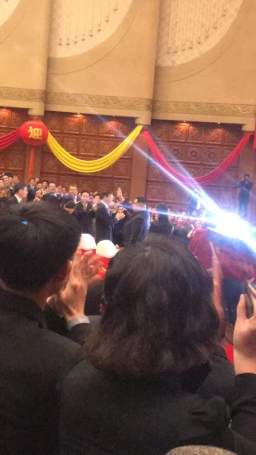 Why did my guide not want me to bring my phone? Is it his worry about something  which may go wrong, then it’s his fault. I realise that it is this hierarchical system  which makes the him paranoia.

When we left, I hinted about how I respect their leader, because he trusted everyone (without the security check.). Be free and open because there is no need to fear if you have done nothing wrong.

You can watch portions of this  as well as my magic in  here http://www.bbc.com/news/av/world-asia-43890630/why-i-performed-magic-in-north-korea

And the ballet? Yes, the performance is wonderful.