On Mansu Hill are the grand bronze statues of the Founder Kim Il-sung and his son Kim Jong-il. Standing at a staggering 20 meters, the statues’ left and right are accompanied by monuments of Korean’s Worker Party’s flag and 228 bronze figures all standing at 5 meters high. This sculpture is symbolic of the socialist revolution and the struggle against North Korea’s imperialist enemies, the Japanese. The American enemies are not forgotten either; they have a slogan dedicated to them: “Let us drive out US imperialism and reunify the country.”

Considered one of the most sacred places in the DPRK, the monuments allow the Great Leaders to be remembered forever. I heard tour groups are usually brought here on their first stop. When I was there, I saw several wedding groups going there to pay their respect.

Visitors are expected to: 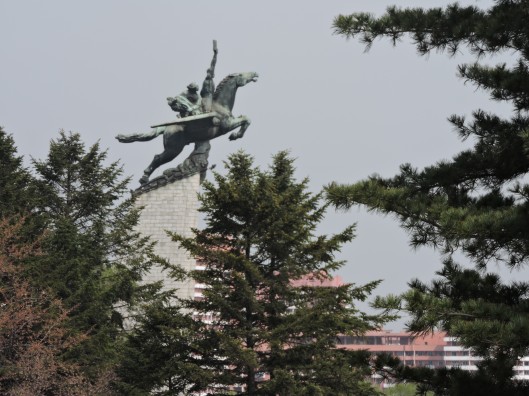 The Cholima Statue is just round the corner….