This is day 6 in Pyongyang for me.

I asked to visit the subway but was rejected. In fact, I waited in the room for a long time for news and the answer is no when it’s near lunch time. So my guide suggested we eat Ryeongmyeong (cold noodles). When we are at the lobby, he told me that we eat in the hotel, but I wanted to go to somewhere outside to eat.

Then finally, I persuaded him to have a walk around the hotel. We didn’t walk to the Mirae Scientist Street which I wanted to walk to, but we managed to walk to the river side to the back of the hotel. Our hotel is situated on Yanggakdong (Yanggak Island). I didn’t take any photos along the way; I kept reassuring him that Pyongyangis beautiful, hopefully he understood that there is no need to hide anything.

We sat down and chat. He opened up a little about his depression and girlfriend wanting him to be a diplomat with UN. He says it is impossible. I told him that Nothing is Impossible with some philosophical stories. “I’ll try,” he says. “No! Don’t say you try. Say you can.” Nothing is going to change overnight, hopefully this will give him some food for thought and bring about change.

The Fireworks in Pyongyang

After our show, we were brought to some boring souvenir shop.

Then at the hotel lobby, I met the group with Michael from Paektu Cultural Exchange and found out that they are going to see the fireworks at the square. I asked my guide if I can go and he quickly asked his senior. Permission was given!

I chased after the tour group, but their tour leader says that I cannot join them. I told my guide that we will travel by taxi. His reply? “There’s no taxi.” “Call a taxi?” “It will be expensive.” Then like magic, a taxi appear from afar. He initially said that it’s not a taxi. When it turned out to be a taxi, he said he was tired. I insisted and off we went. 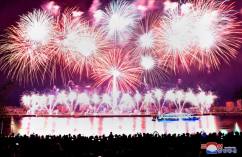 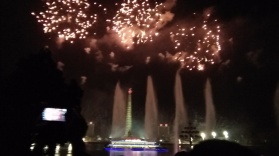 Maybe it is that triumph (makes me want to celebrate on top of the Arch of Triumph) which makes this trip really different!

Just when we reach the venue, the fireworks just begin. There were a lot of people. (The dark shadows in the picture are people!) The fireworks last around 15 minutes. All the way for 15 min of fireworks; is it worth it? Well, yes not because of fireworks, but the mindset change and hopefully better understanding that it is okay to step out of the boundary a little.

After the fireworks, my guide rushed to find our bus (there were a group who were brought there.). Of course, I wanted to stay a little longer to look and hang around but he was so nervous so I didn’t want to push it. There was like small carnival around the area.

At the dining hall, I saw a boy playing with cards. Hmm…. perfect time for my magic? I decided to show him some magic and 2 girls joined in. Apparently, they are (Koreans) from China, and they are here too to perform at the April Spring Friendship Art Festival.

Soon my magic show gathered a crowd and some Russians and Japanese joined in. Words spread and more joined.

After a while, I managed to eat my dining with the children at my table.

My guide suggested karaoke and I said ok. It started slowly and I almost wanted to go back to the room or maybe find familiar people to chat. I went to see the Russians bowling for a while.

Back at the karaoke, everyone I knew, was there! I made some new friends from Holland, Taiwan as well as Scotland!

Some of them gave me some advice how to make the guide relax because he said he wanted to go back to rest and suddenly he would appear again (probably because I am still at the Karaoke and his job is to be with me.). I talked to people to understand more about the country. Indeed, this is what travelling is about, interaction with people around you.

2 thoughts on “Pyongyang: The walk in the park”